When I last wrote, I was on the lung transplant list, but I can’t really say that I was waiting for lungs. I wasn’t expecting to be called for many months. Before I dive into the last four chaotic months of my life, I must disclose that my most recent post (December 2014) left me in limbo on the transplant list. However, there was a communication error on my part and it turns out I wasn’t officially listed until January 7, 2015. I only note this because it means that I was listed for transplant a miraculously meager 30-some days before my time came. It’s one thing to know logically that “the call” is coming, but it’s another state of being to actually live with the constant notion that any minute could ignite my new life. I don’t really know where or how to begin a recap of the last four months, however. I want to share my story in all its ups and downs in the hope that I might reach someone and inspire them to be a donor. Without my donor, I might not have been here this year- certainly not a few years from now.

I should start by expressing my ultimate gratitude for the chance to have a new life with new lungs. My donor is my angel. I’m so extremely fortunate. I have as yet been unable to find the words to convey my gratitude to my donor’s family. I’m also incredibly blessed by a phenomenal support system, at the forefront of which is my family. They have been with me through everything and I’d be lost without them. My entire community has also shown me such love and kindness- through their faith and encouragement, I always knew someone was thinking of me and praying. Although this quest has tested me in ways I thought I couldn’t handle, I am STILL HERE. I’m still standing. I’m perpetually working on myself and my health. There is nothing static about my life; things can happen in the blink of an eye.

“The call” happened mid-afternoon, in quite a casual way on February 10, 2015. My mom had just hung up the phone after scheduling my next clinic visit with the Madison pulmonary care team. I therefore almost didn’t answer my phone when my transplant coordinator Kelly called me a few moments later and nonchalantly inquired as to whether I’d “want to have a lung transplant” that day. She could have been reading the want-ads out loud, for as calm as she was. My body began to shake violently as I tried to digest this weighted question. My mom saw my eyes develop into wide saucers as Kelly imparted to me a last few pieces of advice and direction before I jumped into action. Luckily my mom was home early from work for the day, and my dad was working in the woods (a self-employed logger) no more than 20 minutes from home. After ransacking the house, trying to plan and pack for something so momentous, the three of us were on the road in about 45 minutes. I also called my sister Sarah (Dr. Carlson, actually) and she immediately booked a flight to meet us in Madison.

From this point on, timelines get blurred and some events seem fuzzy because of the nature of the whole ordeal. Medications, emotions, and situations changed how I perceived things, and changed my reality of things so one can imagine how difficult it was and still is to sort out everything that’s occurred.

The transplant itself went extremely well, I’m told. I was taken into surgery late on February 11th and it was finished about 8 hours later on the 12th. In a quick recap of events, I began this first transplant hospital stay by spending about 2½ weeks post-transplant on the transplant unit until I grew well enough to transfer to the rehabilitation unit, where I worked on strength, endurance, and stretching exercises for an additional week. After multiple hurdles and triumphs, I was discharged on March 13th to stay at a Madison hotel. 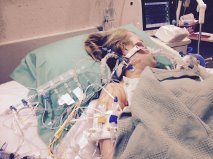 This is obviously the abridged version of the odyssey that has become my story. In more detail, the surgeons and those whom assisted with the transplant were pleased with the results, and within the first 6 hours after the surgery, they decided that they could take me off the ventilator (the breathing machine) and let me breathe on my own. As is turns out, my body was just not quite strong enough to breathe for itself. I was struggling too much and needed more oxygen than I could obtain on my own, so the next day the surgical team had to sedate and reintubate me (put the ventilator’s breathing tube back into my windpipe). After a few days on the ventilator, the team tried it again- they took out the tube and I felt great. I even got up and walked to the nurses’ station with assistance. As I’ve learned, though, anything worth having is not usually easily attained- I started to backslide again and I had to be re-reintubated (that’s the third time, if you count the initial intubation). After my body could rest some more, I was finally able to be taken off the ventilator for the final time. I don’t really recall much of that time after the transplant, but I do remember that simply walking a few yards was incredibly difficult. My weakened body had to push itselfself mentally and physically with the encouragement of my family; if I wouldn’t/couldn’t get up and keep moving about, I might end up back on the ventilator. I can’t credit my determination alone, though, because with every step of the way, there were people cheering me on and assuring me that my progress was nothing less than stellar.

At some point among the multiple intubations, my vocal cords were damaged. I found I was unable to speak above a whisper, and therefore swallowing was also precarious. Because my vocal folds wouldn’t close all the way, any small food particles or liquids could go down my wind pipe into my new lungs instead of into my esophagus and then stomach as it’s supposed to happen. If anything were to accidentally get into my lungs, it could cause very severe pneumonia to develop, which would be detrimental to such new and fragile organs. Therefore, no eating or drinking. This whole situation was only one of many complications that arose after the transplant surgery. I also developed a deep blood clot in my neck/upper arm region from having an IV placed in my jugular vein. This seemingly small problem posed larger problems further down the road.

Two of the chest tubes that were placed into my lungs were left in to drain all the fluid that collected as I recovered. (I had come out of surgery with 5 chest tubes.) They wouldn’t stop draining even after I left the hospital to stay at a hotel, and the doctors didn’t want to pull them out too soon and have the fluid collect in my lungs. After 50-odd days with these painful, inconvenient tubes, the doctors took a leap of faith and pulled them with the hopes that my lungs would acclimate to the fluid and eventually equalize. I would have no such luck. Approximately a week passed before the fluid was too much for my lungs and caused me to be short of breath and gain an excess of water weight. This caused me to be hospitalized for a second time. I didn’t fully know, even at that point, how much harder this journey would become.

This entry was posted in Uncategorized and tagged cystic fibrosis, lung transplant, perseverence. Bookmark the permalink.

6 Responses to The Lung Transplant Diary